MOTHXR, a local New York band, wrapped up a month long tour with San Cisco July 2nd at the Bowery Ballroom.  The band has been traveling around the country and were definitely happy to be home and see their New York City fan base.  After finishing the set, with their popular hit “Easy,” front man Penn Badgley met fans downstairs to sign autographs and take pictures.  Here are a few pictures from the great performance: 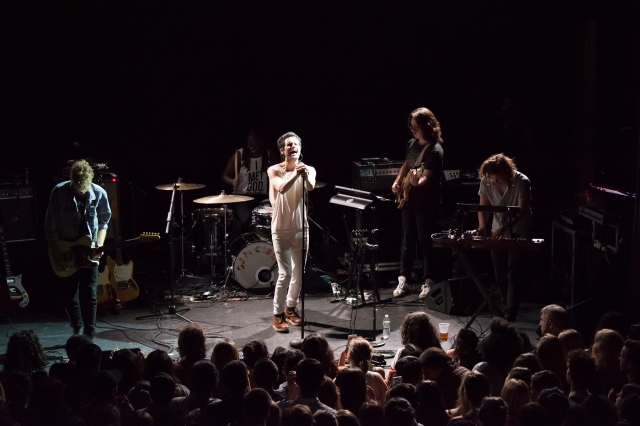 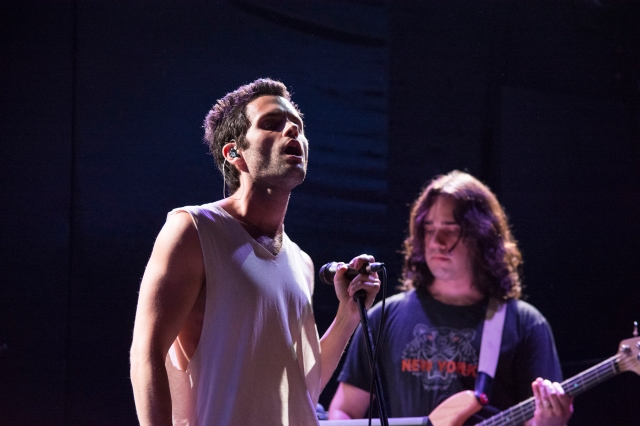 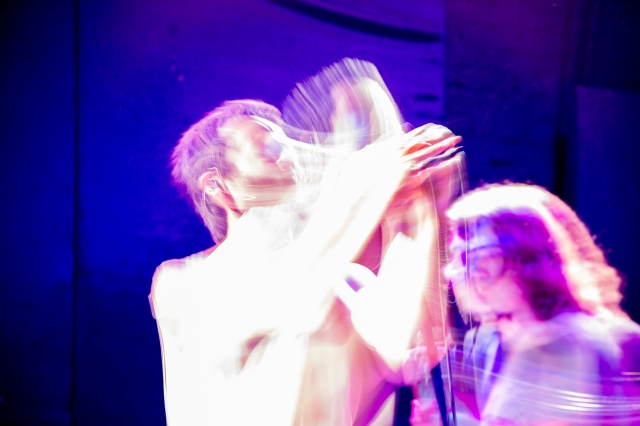 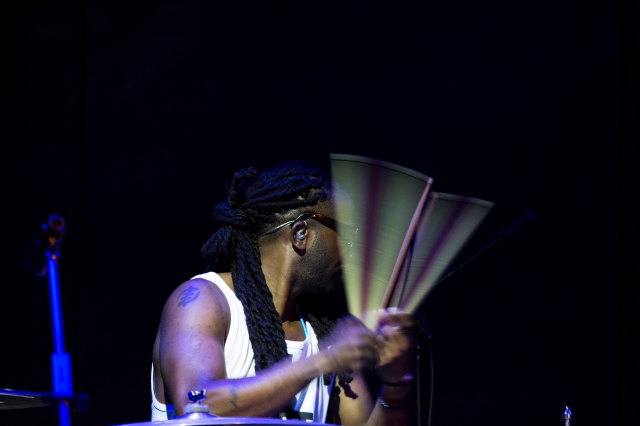 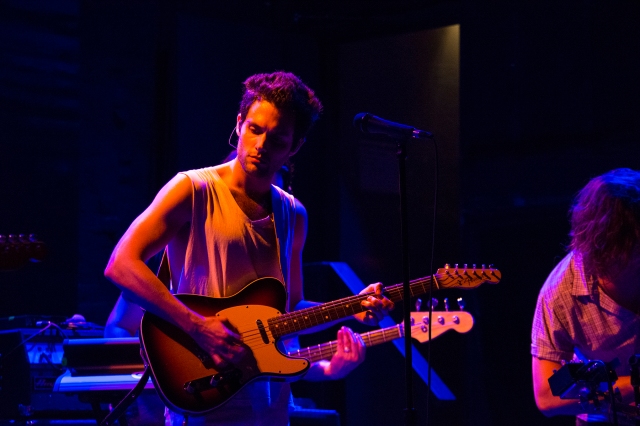 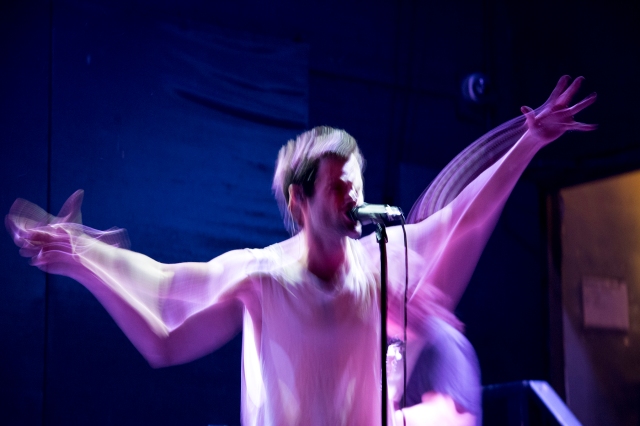 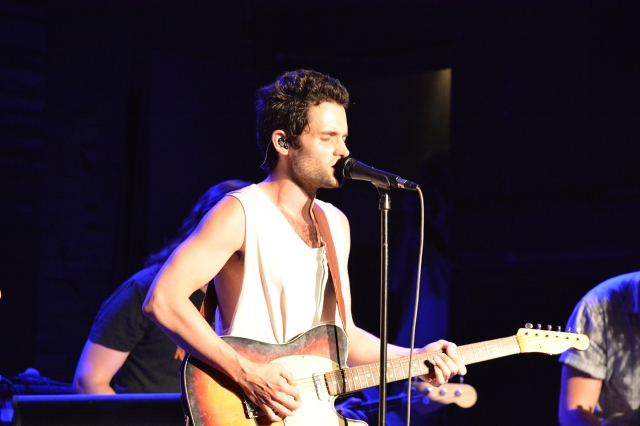 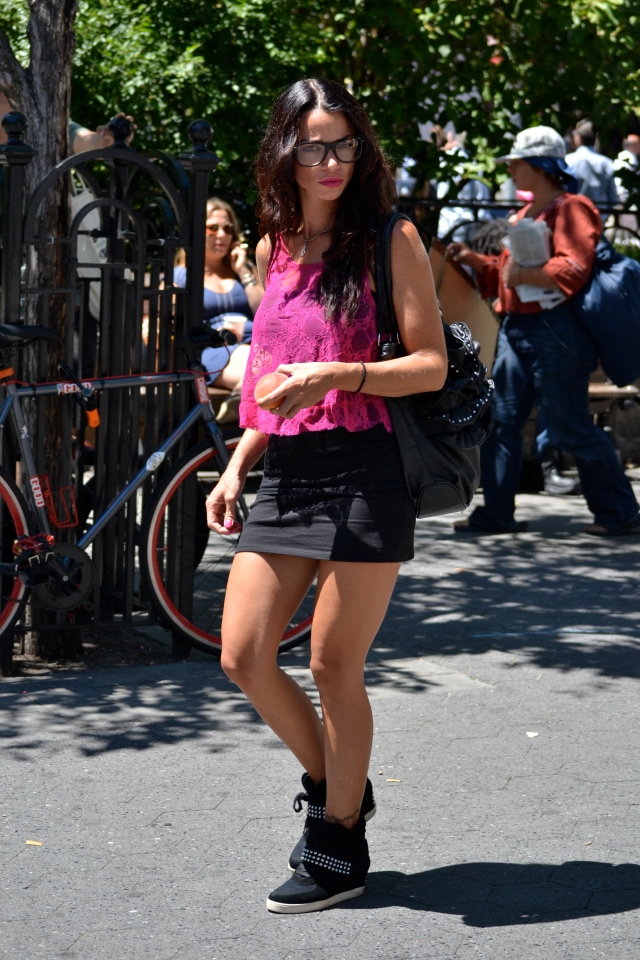 This young woman has a very fun and sassy look. Her short black skirt is flirty and youthful, especially when paired with the black, high top sneakers adorned with a studded strap across the laces. The black bag hanging from her shoulder matches the shoes, with its studded leather ruffles. The lace tank, with its rough trim adds an amazing amount of color to the outfit, and she pairs it flawlessly with the hot pink lipstick and nail polish. Definitely a chic play on the EDM style.

This musician has an artistically retro look, reminiscent of a young Jimi Hendrix. Around the collar of his white button down, he wears a uniquely tied, brown cravat. Atop the dress shirt is a bold, red vest from The Brooklyn Circus. His black dress pants have clean lines and sit just above his patent leather shoes, leaving room for his red socks to show through. Underneath his crushed trilby hat resides a well-manicured Afro and a scruffy goatee. Over his shoulder rests a soft bodied guitar case, in which he keeps his instrument of choice. 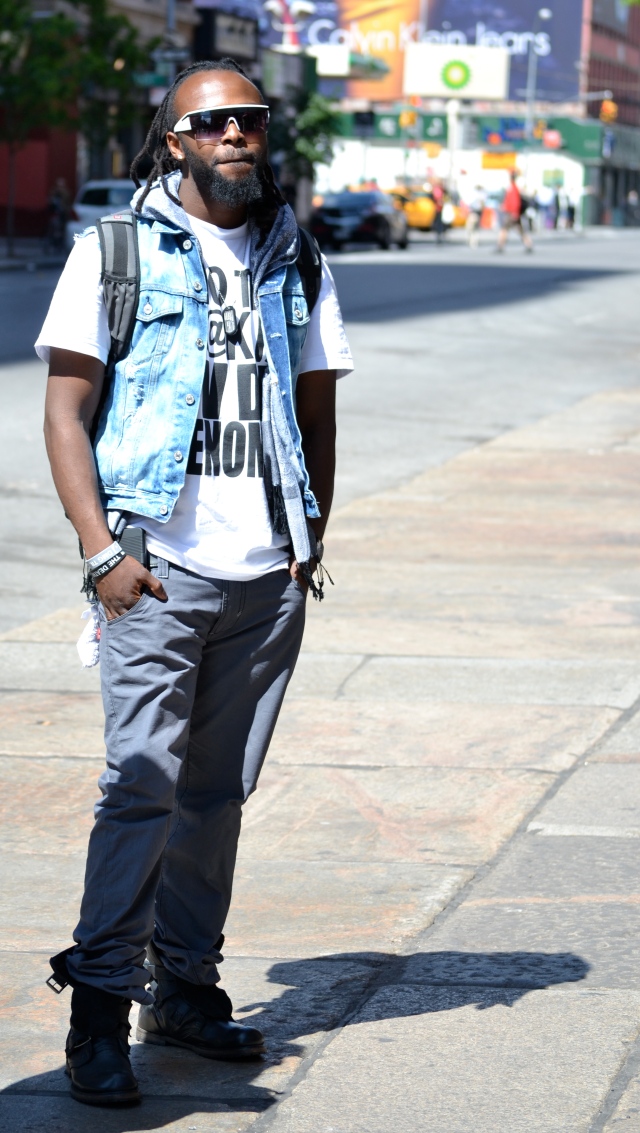 Straight out of Kansas City, Kansas, this gentleman is no stranger to rockin’ his own style. Going by the name Irv Da Phenom, this rapper has graced stages around the world representing his own label Def Metal Gospel (DMG).
I caught him on the streets in SoHo, after an interview with MTV, sporting a pair of grey jeans bloused over the top of unbuckled tanker boots. Over his white Irv Da Phenom shirt, he rocked a cut off sleeve jean vest and a fringed scarf around his neck. He had on a pair of futuristic, white shades to top off the look.
Check Irv Da Phenom @ http://irvdaphenom.com/ 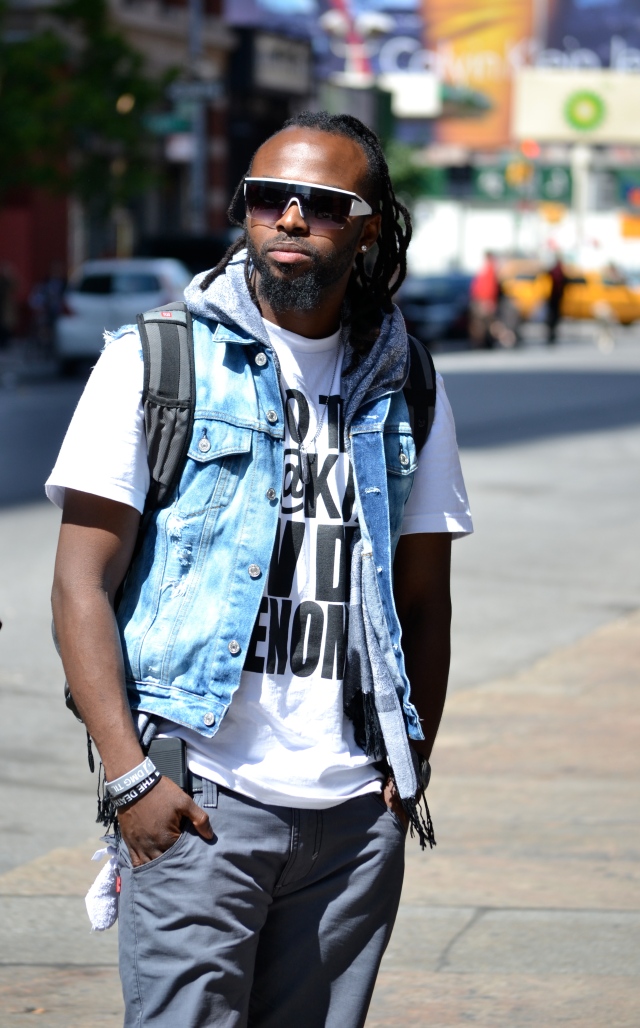 Some of the Captured set to a very fun song “Walkin Around” by Dean & Ravo.  Hope you like it! 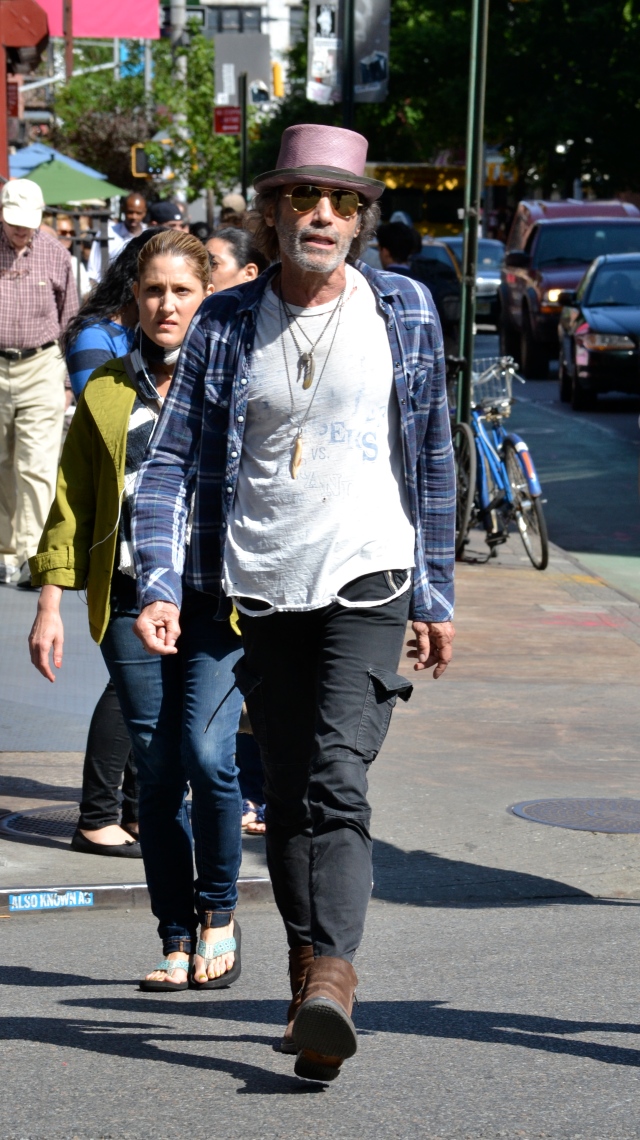 There is nothing new in this man’s outfit, but the aged items work well to pull off a Rock n’ Roll look. His skinny, black cargo jeans are tucked into the tops of brown suede ankle boots. His purple, plaid flannel button down is rough from wear, yet sits relaxed atop his shoulders. Below this flannel is an old white t-shirt covered with holes around its edges. The graphic on it is so worn, that only a few letters remain visible. His salt and pepper scruff and long curls are tucked underneath a purple top hat that finishes off the Rock n’ Roll vibe.

A Photo slideshow of pictures from my collection set to the unbelievable Aretha Franklin signing Natural Woman.

The Felix Cabrera Band reunited with guitarist Jimmy Vivino last weekend for a concert in Port Washington, NY.  The set included a few well-known covers bolstered by their blues and Latin originals.  The dance floor was full the entire night as people only stopped dancing to chuckle at the witty onstage banter.

Felix Cabrera was born in Havana, Cuba.  Though he moved to Miami, FL at a young age, his Latin heritage has stayed strong, both in his life and in his music.  Cabrera, a musical child, fell in love when he heard Bob Dylan’s “Like a Rolling Stone” on the radio, and bought his first harmonica the very next day.  He played along with recordings of artists, such as BB King and Muddy Waters.

Cabrera bounced around from genre to genre, finally forming his own band “Felix and the Havanas” in 1984.  Blending Rock n’ Roll with Latin beats, “the Havanas” had a unique sound, which gained notoriety when they opened for James Brown.  In the 1990’s Cabrera joined Jimmy Vivino for the first time in “The Black Italians.”  Their music careers have since intertwined on numerous occasions.

You might know Jimmy Vivino from his day job as Conan O’Brein’s bandleader on TBS.  Before he became a late night bandleader, Vivino held a number of gigs.  He was born into a musical family in Paterson, NJ in 1955.   Learning trumpet, guitar and keyboard, Vivino soon found himself in demand as a studio musician.

After moving to New York City, Vivino became a Broadway musical director at the young age of 30.  Though his show closed after only a few months, Vivino kept his feet under him.  He began working with Al Kooper (Blood, Sweat & Tears) and John Sebastian (The Lovin’ Spoonful), even working as a musical director on movies, such as Sister Act and The First Wives Club.

Today, when not working on Conan, Vivino moonlights with his old friends.  He and The Felix Cabrera Band have put on a number of shows in the Greater New York area over the past few years.  Between the screaming harmonicas and vibrating guitar licks, the show is really something that must be seen.  Both Cabrera and Vivino have a great time on stage and it shows, both in the music and in their interactions with each other and the audience.

Felix Cabrera playing the harp in the beginning of the set.

Cabrera showing off his range, with one of many high notes. 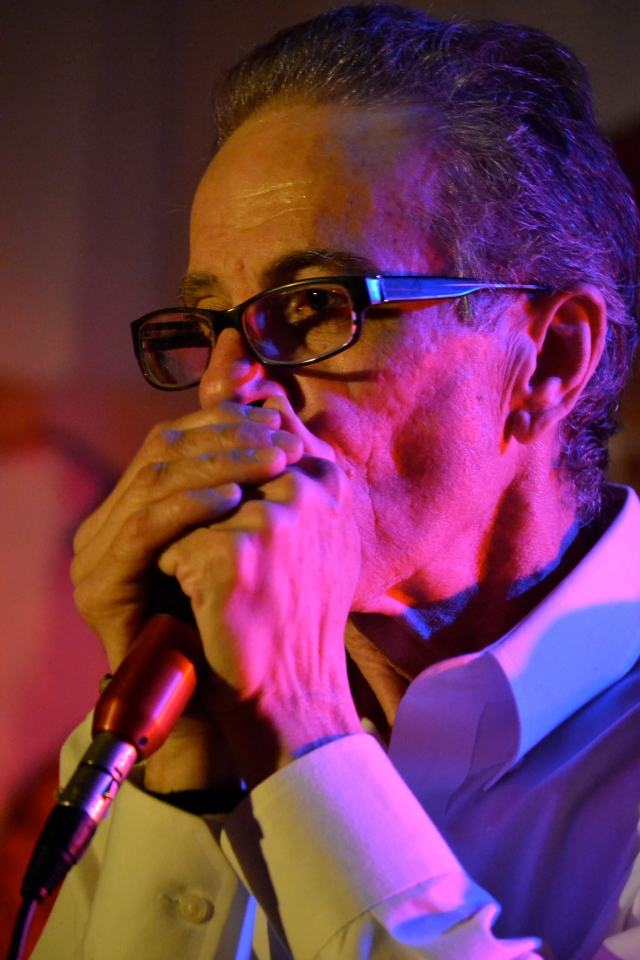 As things warmed up on stage, Cabrera shed his sport coat.

Vivino sets the tempo for the band, laying out the first few chords to the next song.

Cabrera really worked up a sweat on stage that night. 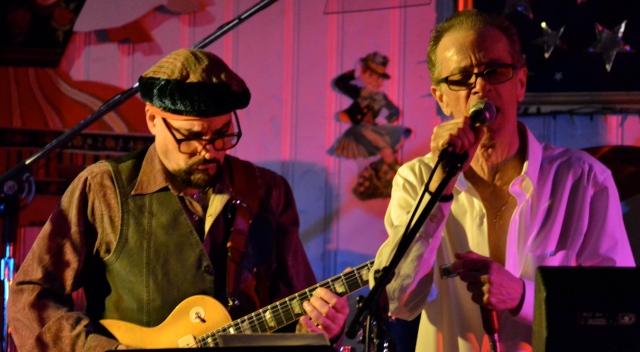 The two have very different styles, but mesh so well on stage. 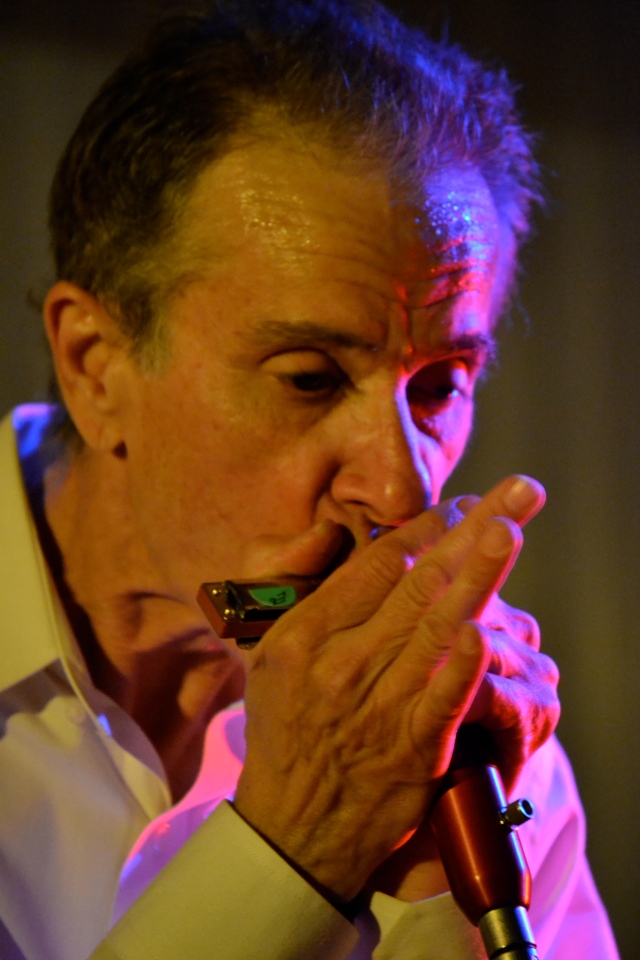 Cabrera takes a break from singing and belts out another harp solo.

Vivino's fingers glide up and down the fret board during one of his many guitar solos.

Cabrera laughs at Vivino's witty joke as they transition into the encore.

Pink is a true spring color. It does wonders lightening up a grey plaid suit.

Billy Joel's portrait hanging in Steinway Hall. The Piano Man is the only non-classical composer honored on the Steinway walls. Painting by Paul Wyse.